The great news is spreading quickly throughout the world! 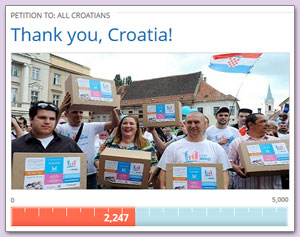 In an act of freedom, nearly 700,000 Croatians signed a petition forcing the government to create the first ever constitutional referendum since they gained their sovereignty and independence in 1991.

The referendum issue was a very important one.

Croatians were voting on making a constitutional amendment to define marriage between 1 man and 1 woman.

Last Sunday, 65% of Croatians voted in favor of the referendum officially amending their constitution to define marriage between man and woman.

Petition to thank the Croatian voters for their stand

CitizenGO tips our cap to the brave Croatians that stood against the odds and bullying. We have created a petition campaign to thank the Croatian voters for their stand, please join in solidarity by signing this petition.

Soon after the historic vote a media assault began. News outlets around the world were headlining phrases calling them "anti-gay” and "homophobic,” Hollywood celebrities made statements against Croatians, and lobby groups began to mobilize.

We must stand in solidarity with the Croatians, thanking them for defending the family and protecting the definition of marriage. We must let them know that the voices of Hollywood celebrities, news media, and powerful rich lobby groups do not speak for the rest of the world.

If you agree with the constitutional referendum that defines marriage between 1 man and 1 woman, please show your support by signing this petition. From the US to the United Kingdom down to Australia — we are collecting signatures from all over the world. They have been hearing nonstop from their opponents, lets simply tell them GOOD JOB!

Thank you Croatia, for defending Marriage

On behalf of all individuals that believe that marriage is between 1 man and 1 woman, we thank you for setting such a great example to the world with your recent referendum protecting marriage.

It is remarkable that you did not give in to the mass media campaigns and lobby groups that tried to sway your vote.

It is our hope that many our nations will follow your example.